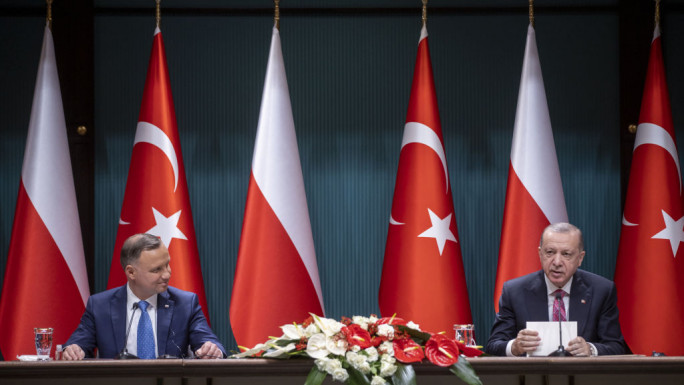 Polish-Turkish relations have been largely praised in Turkish media in recent years, with Warsaw considering Ankara a key ally, particularly in light of growing tensions between Turkey-Ukraine and Russia. During the visit, the countries’ defense ministers signed a $270 million deal for Poland to buy reconnaissance and combat unmanned aerial vehicles (UAVs), making it the first NATO and EU member state to purchase Turkish drones.

The Polish president said he was pleased by the cooperation between the two countries in NATO, where they “share common goals” to ensure national security and fend off regional threats. Under the agreement, Warsaw will acquire 24 Bayraktar-TB2 combat drones and four sets of unmanned aerial vehicles equipped with anti-tank missiles.

Taking into consideration the recent Ankara-Moscow standoff over Ukraine, Poland is attempting to bring Turkey closer to NATO’s Eastern flank in order to play a greater role as a deterrent force against Russia.

As Poland eyes deeper military cooperation with Turkey, it should come as no surprise that in April the Polish government deployed a military contingent of 80 servicemen and a maritime patrol aircraft, Bryza, to participate in NATO’s “Tailored Assurance Measures for Turkey” (TAMT) operation. It marked the first mission undertaken by the Polish military in Turkey. During the joint press conference in May, President Tayyip Recep Erdogan also announced that Turkey would deploy F-16 jets to Poland as part of NATO’s Baltic air policing mission, another initiative aimed at deterring Russia.

Moreover, President Duda’s official visit to Turkey just a month before the upcoming NATO summit could be seen as a clear signal to Ankara that Poland fully understands Turkey’s regional security concerns.

The first batch of combat drones is expected to be delivered to Poland next year. Turkish-made combat drones have gained widespread recognition since being deployed in Libya, Syria, and most recently in the Nagorno-Karabakh conflict. Moreover, the Turkish Armed Forces have used domestically produced drones during what it terms anti-terror military operations in Syria and Iraq.

During the meeting with his Polish counterpart, President Erdogan alluded to their effectiveness, saying, “we are one of the best three, four countries in the world for the hardware”.

For Ankara, the military partnership with Poland demonstrates that Turkey is participating in NATO’s efforts to ensure the security of the alliance and deter threats, namely from Russia. This approach may even help to facilitate bilateral relations with the US ahead of the expected first meeting of President Erdogan and President Joe Biden on the sidelines of the NATO summit in Brussels on 14 June. Another important motivation behind Ankara’s eagerness to strengthen its relations with Poland is to improve deteriorating relations with the EU and attract additional foreign investment from the West in light of Turkey’s deepening economic crisis.

Poland is one of the few member states that openly supports Turkey’s accession to the EU, with key officials having said that they consider Turkey as part of Europe and believe in its future in the bloc. The growing Poland-Turkey alliance, however, is more than just bilateral cooperation. It is also part of a trilateral cooperation mechanism established between Turkey, Poland, and Romania a few years ago in response to Russia’s aggressive policy towards Moldova, Ukraine, and Georgia, as well as in the wider Black Sea region. Certainly, this trilateral cooperation mostly relies on a military dimension as a key pillar rather than political dialogue. Hence, the next step for developing the trilateral pact would be to upgrade it to the presidential level.

Although Poland’s purchase of Turkish weaponry is a good image boost for Ankara, seeking stronger relations with Warsaw not only boosts its own military portfolio but also helps it to assert influence in Eastern Europe. As such, in recent years Turkey has signalled interest in developing relations with the Visegrad Group of countries (V4), and Poland is the best partner to facilitate this.

However, despite the strategic partnership between Poland and Turkey, and other NATO member states, the future of Turkey-NATO relations will depend on the results of further US-Turkey negotiations over the Russian S-400 system which Ankara purchased from Moscow. If both sides fail to compromise on the S-400 deal, any new, tougher US sanctions may limit Turkey’s relations with other NATO member states in the near future.

Originally was published by Alaraby