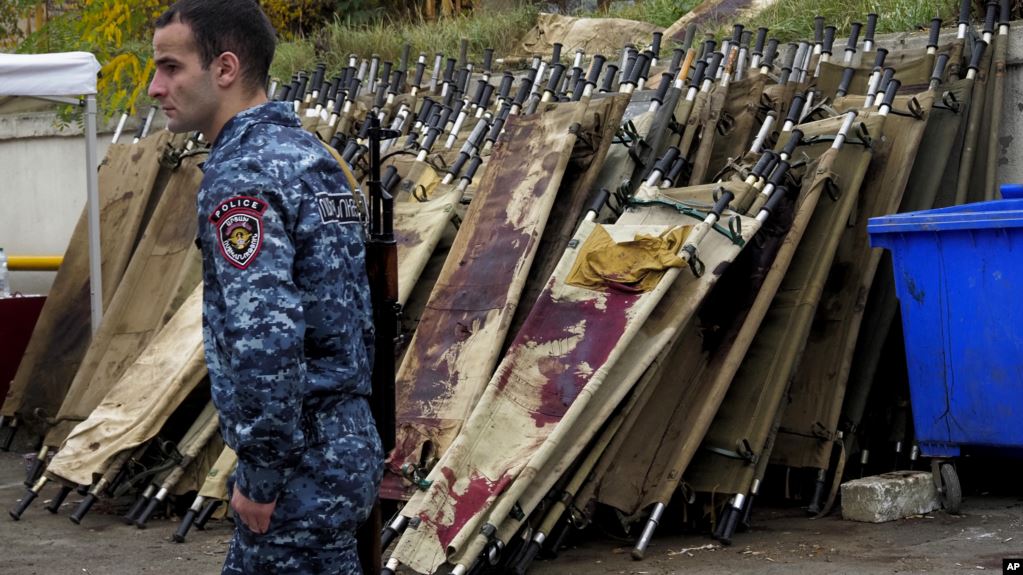 Alex Melikishvili, a research analyst at IHS Markit Country Risk, says it was Turkish support for Azerbaijan that made the war “qualitatively different from all previous conflagrations.” Melikishvili says the presence of Turkish F-16 fighter jets at a military airfield in Ganca, Azerbaijan’s second-largest city, was “tangible confirmation” that the geopolitical balance in the South Caucasus had shifted in Azerbaijan’s favor.

Fuad Shahbazov, an analyst at the Baku-based Center For Strategic Communications, agrees that the most significant battlefield advantage for Azerbaijan was its technological superiority.

Shahbazov says that as a member of the Russian-led Collective Security Treaty Organization (CSTO), Armenia was “mostly only able to get Russian-made weaponry, receiving batches of weapons from Russia.”

“About 90 to 95 percent of its arsenal is Russian-made weaponry,” Shahbazov told RFE/RL. “But Azerbaijan has managed to diversify its arsenal by importing weapons from Turkey and from Israel.”

Shahbazov notes that Baku also has used its income from oil and natural gas exports during the past decade to buy weapons from NATO-member countries.

“The Bayraktar drones carry four missiles that are also produced by Turkey — MAM laser-guided ‘smart micromunition’ missiles,” Shahbazov says. “These drones have been used in Libya and Syria where they’ve proved to be very effective against all Russian-made weapons.”

Kasapoglu says Azerbaijan’s technological advantage didn’t come only from the combat and surveillance drones it purchased.

“Interestingly, the Azerbaijani drone campaign strongly resembled Turkey’s Operation Spring Shield against the Syrian Arab Army back in early 2020,” Kasapoglu wrote in an analysis published by the Washington-based Jamestown Foundation.

He says that was demonstrated by the way Azerbaijan’s land-based artillery and multiple-rocket launchers worked “in close coordination with unmanned aerial systems tasked with intelligence, target accusation, and battle damage assessment.”

“The second major similarity was the systematic hunt for the enemy’s mobile air defenses,” Kasapoglu says.

Shahbazov adds that Azerbaijan managed to draw out and expose the Armenian air defenses by sacrificing an air fleet of Soviet-designed Antonov AN-2 biplanes that it “probably purchased from Ukraine.”

Designed in the late 1940s, those Soviet-era biplanes are now mostly used as crop dusters or to fight forest fires. They are widely considered “unusable” in modern combat.

But Shahbazov says Baku fitted its Antonov AN-2s out so they could be piloted by remote control at low altitudes over the Armenian air defenses.

“They prepared camouflage to make them look like drones,” Shahbazov explains. “The Armenians posted videos of what they thought were drones being shot down by their air defenses.”

“What was really happening is that whenever the Armenians hit an AN-2 with its air defenses, the real Azerbaijani surveillance drones at higher altitudes were able to identify their positions precisely and easily destroy all of these air defenses.”

But it wasn’t just a high-tech, robotic warfare doctrine that NATO-member Turkey has shared with Azerbaijan.

Combat footage on social-media platforms like Telegram — apparently shared by Azerbaijani soldiers — hint at how Baku also took lessons from the tactics of U.S.-led coalition forces against the Taliban in the mountains of Afghanistan since late 2001.

In those operations, NATO troops did not mass together in the thousands according to the methods of 20th-century conventional warfare — a strategy that requires the logistical complications of supply lines vulnerable to guerrilla counterattacks.

Across the Afghan interior and along the 3,300 kilometers of border with Pakistan, small specialized U.S. commando teams were sent into Taliban territory to carry out “search and destroy” missions.

Working together with soldiers from the fledgling Afghan National Army, those commando teams use a device known as SOFLAM — a Special Operations Forces Laser Acquisition Marker — to target nearby Taliban positions they spotted in the mountainous terrain.

When a commando team would “paint” a target with SOFLAM, coalition aircraft circling over the battlefield could lock in on the signal and drop laser-guided JDAM bombs — joint-attack direct munitions — onto the targets.

In Azerbaijan’s offensive to the southeast of Nagorno-Karabakh, once gaps were opened in the Armenian defensive lines by the initial drone strikes, Baku’s commando teams infiltrated the forests and seized the high ground around towns and villages along the path of the advance.

In Hadrut, just days before the two sides engaged in combat there, ethnic Armenian residents spoke of seeing “strange men, not Armenians” who’d infiltrated vacated houses to establish a presence in the town.

Described as “saboteur groups” by both Baku and Yerevan, the Azerbaijani commando teams could provide target coordinates from their positions on the ground — directing fire from Azerbaijan’s nearby rocket launchers and howitzer artillery or from the air.

Mustafa Hajibeyli, an Azerbaijani veteran of the war in the early 1990s, told RFE/RL that the tactic appears to have been repeated throughout the war as Baku’s forces took back towns and villages along the southern flank of Nagorno-Karabakh and the Iranian border — “forcing the enemy to surrender cities without major clashes.”

“They did that in Fuzuli (Varanda) and Caybrayil (Jrakan), taking control of the surrounding mountains and trying to cut all the roads to the cities — forcing the enemy to leave their heavy fortifications and flee,” Hajibeyli says.

Shahbazov agrees that the commando tactics used by the United States and NATO forces in Afghanistan were adopted by Azerbaijan for the latest fighting over Nagorno-Karabakh — likely bolstered by Turkey’s armed forces, which played a key role in Afghanistan while heading the International Security Assistance Force (ISAF) in Afghanistan.

“Azerbaijani special forces mostly have been trained in Turkish military academies for many years and in Pakistani military academies,” Shahbazov told RFE/RL. “We have seen this tactic used in this current war.”

“Azerbaijan learned good lessons from its losses in the 1990s and from its four-day war against Armenian forces in 2016,” Shahbazov says. “This time, unlike those past battles, Baku has deployed small saboteur groups that have been very active along the contact line.”

“If you understand this tactic, you can see evidence of it in many of the videos that have been posted to social media from the combat zone,” he says.

“In Susa, when Azerbaijani forces took control of the city, it was not a full-scale assault by Azerbaijan’s artillery and drones,” Shahbazov says. “Susa was retaken by close combat when these saboteur groups, different saboteur groups, entered the city and pushed for the Armenian forces to withdraw from the city center — then pushed them out of the city.”

“It is the first time Azerbaijan has actively used so many special forces,” he said. “And they have used them in these small military saboteur groups to force out the Armenians.”