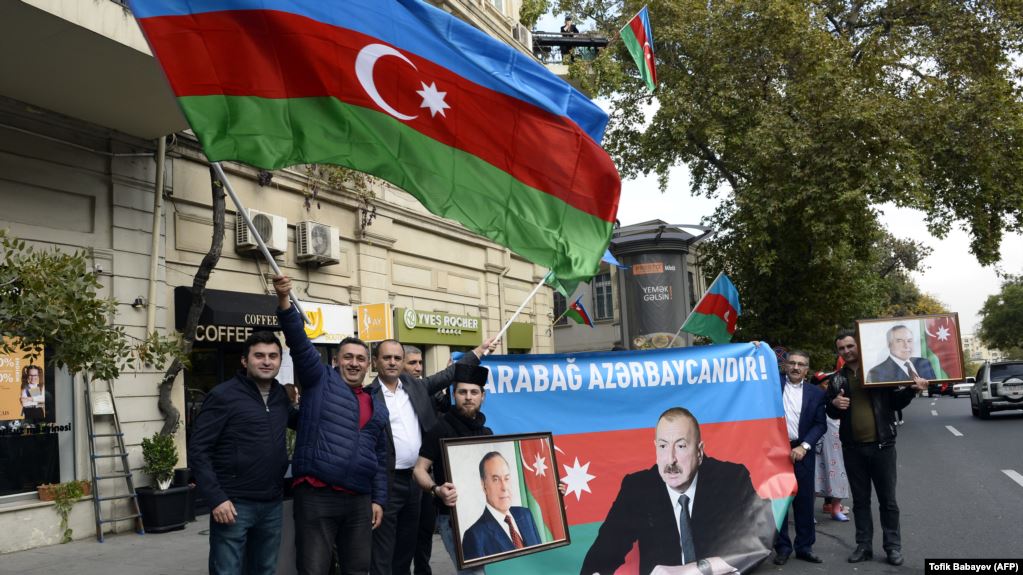 People wave the national flag and hold portraits of Azerbaijani President Ilham Aliyev and his father and predecessor Heydar as they celebrate in the streets of Baku on November 10.

Still euphoric over the capture of a vital city from Armenian forces, Azerbaijanis celebrated on the streets of Baku after a Russian-brokered deal was signed late on November 9 aimed at ending the war over the breakaway region of Nagorno-Karabakh.

Meanwhile, Yerevan, the Armenian capital, was plunged into a political crisis over the truce. Angry crowds stormed the Armenian parliament and ransacked government buildings after Prime Minister Nikol Pashinian announced the deal on his Facebook page. As demonstrators also broke into Pashinian’s official residence, there was speculation the Armenian leader would be toppled and that the truce, along with the huge battlefield losses in and around Nagorno-Karabakh, could bring pro-Moscow Armenian nationalists back into power.

Fuad Shahbazov, a research analyst at the Baku-based Center for Strategic Communications, told RFE/RL that the Turkish reference was necessary for Azerbaijani President Ilham Aliyev to agree to allow Russian peacekeepers on Azerbaijani soil. “Azerbaijan agreed to Russian peacekeepers only on the condition that Turkish soldiers also will be on the ground,” he said. “We’re still wondering about the details — what Turkish forces will be doing and where exactly they’ll be stationed.”

“But public opinion about Russia is really bad in Azerbaijan,” he said. “There’s a confidence problem between Azerbaijan and Russia. So Turkish forces, for Azerbaijanis, are seen as a real guarantor of stability.”

Shahbazov added that he would not be surprised if Baku insisted that it has agreed to Russian peacekeepers “only on the condition that Turkish soldiers also are represented here.”

But Aliyev and Azerbaijanis may be quickly disappointed on that issue.

Kremlin spokesman Dmitry Peskov said on November 10 there had been no agreement on deploying any Turkish peacekeepers in Nagorno-Karabakh. He said the Turkish military would help staff the joint monitoring center.

Azerbaijan’s opposition parties had varying views of the cease-fire agreement.

Arif Hacili, the head of the Musavat Party, bemoaned the fact that no consultations were held with political parties, members of parliament, or Azerbaijani citizens.

Hacili said people only learned about the agreement at 4 a.m. in the morning. He called the timing of the announcement “unacceptable” and said the truce violated the constitution because foreign troops are being deployed in Azerbaijan without parliament’s approval.

Political analyst Rauf Mirkadirov called November 10 “a black day” in Azerbaijan’s history. He said history will not view Aliyev as the country’s “savior” because he is allowing Russian troops to establish a presence in the country — something Baku has avoided since Azerbaijan achieved independence from the Soviet Union in 1991 and Russian troops left the following year.

Seymur Hazi, deputy chairman of the opposition Azerbaijani Popular Front Party, said he supported the army and considered the war to have been won. “But the party is concerned about the return of the Russian Army to the region after a long period,” he said, adding that he believes Russian deployments pose a threat to Azerbaijan’s independence.

Matthew Bryza, a former U.S. ambassador to Azerbaijan who co-chaired negotiations over the conflict as Washington’s envoy in the OSCE’s Minsk Group, agreed that Russian peacekeepers on Azerbaijani territory were “a negative” for Baku. “But overall, this is a huge victory for Aliyev,” he told RFE/RL. “Azerbaijan regains control of all of its seven [occupied] territories and [parts of] Nagorno-Karabakh with no change in the status of Karabakh. It’s the biggest diplomatic victory in the history of an independent Azerbaijan.”

Ending the war without an assault on Stepanakert is a smart move for Baku, Bryza said. “There are a lot of people with war fever in Azerbaijan” who wanted its forces to take back all of Nagorno-Karabakh from the ethnic Armenian separatists, he said.

“That would be unwise,” Bryza said. “You don’t gain anything. All you do is risk killing a lot of civilians.”

“Azerbaijan already won the war when it recaptured Susa over the weekend,” he continued. “It controls access to Stepanakert. There is nothing more to be gained on the ground militarily, but everything to be lost politically,” arguing that Azerbaijan would be seen as “an international pariah” if it continued to advance on Stepanakert after the Armenian forces were largely defeated.

Regarding the political situation in Yerevan, Bryza said the Kremlin would be happy if Pashinian was forced from power as a result of the conflict. “Armenia lost the war and this is a huge strategic defeat for them,” he said. “It’s probably the worst thing that’s happened to Armenia since the Bolsheviks took over and, maybe, since 1915.”

Pashinian “had a chance to have a much better deal,” but rejected previously agreed “basic principles” contained in three previous cease-fire agreements, Bryza said.

Richard Giragosian, the head of the Center for Regional Studies in Yerevan, told RFE/RL that Pashinian “had no choice.”

“To be honest…after losing Susa we had to accept the reality — if we do not accept this agreement dictated by Russia, we may lose the whole of Nagorno-Karabakh,” he said. “We had no alternative. By signing this agreement we saved the people [living and fighting] there, the rest of [the territory of] Nagorno-Karabakh, and stopped the war. These were important achievements.”

“For better or for worse, I think this is Pashinian’s swan song,” Bryza said. “He had a popular support base but it was not organized. It was not consolidated into a political force that could counter the extreme nationalists and the entrenched business interests” dominating Armenian politics.

“Russia knew that if and when Armenia lost this war, Pashinian would be teetering, ready to fall off the cliff, and his political career would effectively be over,” he added.

Arkady Dubnov, a political scientist at the Carnegie Moscow Center, told Current Time on November 10 that there was one bright spot for ethnic Armenians in Stepanakert.

With the exception of Susa, Dubnov said, the Armenians had managed to “preserve the core of Nagorno-Karabakh” in the form it had been when its de facto leaders in Stepanakert declared independence nearly three decades ago.