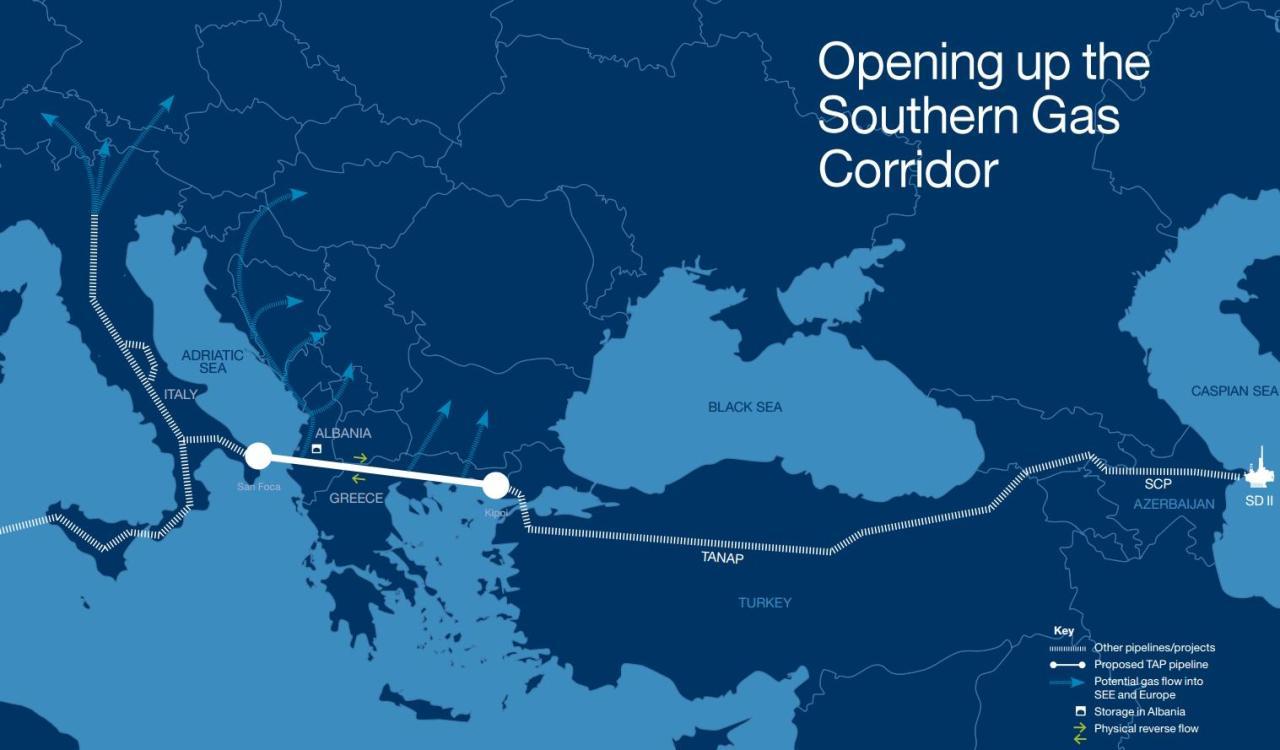 Azerbaijan’s President Ilham Aliyev, on May 29, officially inaugurated the first phase of his country’s long-awaited flagship Southern Gas Corridor (SGC) project, through which Caspian-basin natural gas (from the offshore Shah-Deniz field) will be transported to Europe (Azernews, May 29). The new project consists of several linked pipelines that pass through Azerbaijan and Georgia (via the South Caucasus Pipeline Expansion, or SCPX), Turkey (via the Trans-Anatolian Pipeline, TANAP), and further through Greece, Albania, and into Italy (via the Trans-Adriatic Pipeline, TAP). In the initial operational phase of the SGC, 6 billion cubic meters (bcm) of natural gas will annually be transported via Turkey to Europe, and those volumes will be increased to 10 bcm after 2020. Reportedly, the volumes will be expanded to 31 bcm after 2026, if additional gas compressor stations are constructed.

The fact that representatives from the United Kingdom, the United States, and the European Union attended the opening ceremony underlines the geostrategic importance of the SGC project. For now, the project encompasses seven countries, but Baku hopes to soon bring in new stakeholders from the Balkans, like Croatia, Bosnia-Herzegovina, and Montenegro. The SGC project will enhance European energy security and simultaneously increase competition in local energy markets. Nine European companies have agreed to purchase natural gas from the SGC to date, including Shell, Bulgargaz, DEPA, Uniper, Engie, Hera Trading, Edison & Enel, and AXPO (Rns-pdf.londonstockexchange.com, December 31, 2016). By joining the Southern Gas Corridor project, these aforesaid companies seek to diversify their professional portfolios and decrease their dependence on monopolized prices, in particular those stemming from the regional hegemonic market position of Russian Gazprom. Notably, Italy’s Edison company signed an agreement with the State Oil Company of Azerbaijan Republic (SOCAR) to purchase gas from the offshore Shah-Deniz 2 project for a period of 25 years (O&G Links, April 18, 2018).

Moreover, the Trans-Adriatic Pipeline has been granted a special anti-trust rule exemption by the European Commission, allowing the Shah-Deniz consortium to temporarily be able to fill the pipeline fully with Azerbaijani gas (Vzglyad, March 3, 2016).

The opening of the first phase of the Southern Gas Corridor has raised eyebrows in Russia, as this energy transit mega-project could become a real competitor in the long-term to Russian gas giant Gazprom, both in Turkey and Europe. The yearly volume of natural gas transported to Turkey (6 bcm) and Europe (10 bcm) via the SGC is not particularly significant at this time or even in the coming few years. Nevertheless, the opening of this new transit route will, over time, transform Azerbaijan not only into an important gas exporter but also a strategic transit country for gas en route to Turkey and Europe. As the SGC is technically capable of transporting up to 31 bcm per year to the EU’s border, this will allow Azerbaijan to attract additional gas from other producers as well.

Currently, Russia supplies Turkey with natural gas via the Blue Stream pipeline (under the Black Sea) and the Trans-Balkan corridor (across Ukraine and the eastern Balkans). Turkey is currently Russia’s second-biggest gas customer, having imported 29 bcm in 2017 (Platts.com, March 8, 2018). Now Russia’s state-owned Gazprom is building a new gas pipeline—Turk Stream, which consists of two main branches (each with an annual capacity of 15.75 bcm). The first will be utilized to transport natural gas directly to Turkey, while the other branch will target Southern European countries—specifically Greece, Italy and Bulgaria, with further extension possible to Serbia, Hungary and Austria.

The European (including Turkey) gas market is quite large, and Azerbaijani supplies alone would not be able to replace all of Gazprom’s sales, which totaled 202.3 bcm in 2017. In fact, European imports are expected to increase further over the next several decades. According to statistics recently provided by Gazprom, the demand for natural gas in Europe will grow to as much as 546 bcm in 2035, of which about 400–450 bcm will need to be met by imports (Gazprom.ru, 2018, accessed June 6).

Still, taking into consideration Europe’s growing demand for natural gas and its deteriorating relations with Russia, the situation is conducive to a growing role for Azerbaijan as well as other gas producers willing to eventually join the SGC project, like Iran or Turkmenistan. Both countries are known to possess fantastically large gas reserves—33.5 trillion cubic meters and 7.5 trillion cubic meters, respectively (Eia.gov, accessed June 7). As President Aliyev stated during the SGC inauguration ceremony, “Azerbaijan is ready to use the Southern Gas Corridor project in order to transport natural gas from Iran, Israel and Cyprus” (1News, May 29). The involvement of these countries alone (particularly considering Iran’s sanctions situation) would probably not dislodge Gazprom’s strong market position in Central-Eastern Europe, but the possible involvement of Turkmenistan could pose a real long-term commercial challenge. The only obstacle for Turkmenistan at this phase is the still-unresolved status of the Caspian Sea. However, the five Caspian littoral countries are reportedly readying to sign a new agreement over the legal status of the sea sometime later this year, which might finally open the door to the construction of the long-discussed Trans-Caspian Pipeline (Azernews, February 15, 2018; see EDM, November 7, 2017; February 6, 2018). This would boost the potential likelihood of Turkmenistan eventually joining the SGC project.

The inauguration of the SGC offers Baku a number of benefits not limited to financial considerations. Notably, it is a part of Azerbaijan’s tailored strategy to become a main regional gas supplier and an east–west transit country. Of course, the relatively small short-to-medium-term volumes of western-bound Azerbaijani gas will not overshadow Gazprom’s large role on the European market. Yet, the opening of a new transit-corridor outside Russian territory (and outside Moscow’s control) that will deliver non-Russian energy supplies nevertheless promises to have far-reaching strategic implications for the region.