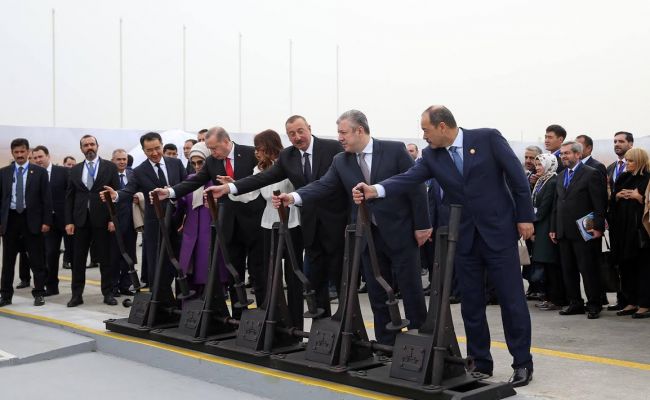 BACKGROUND: The BTK railway, totaling 826 kilometers in length, is intended to complete a transport corridor linking Azerbaijan to Turkey (and thereby linking Central Asia and China to Europe) by rail. The railway is constructed on the basis of a Georgian-Azerbaijani-Turkish intergovernmental agreement. At the initial stage, it will have a capacity of one million passengers and 6.5 million tons of cargo per year, projected to reach 17 million tons of cargo per year by 2023. Starting in Baku, the trains will stop in Tbilisi, pass through gauge-changing facilities in Akhalkalaki, and terminate in north-east Turkey.

Given the importance of the BTK project, most Central Asian countries including Kazakhstan, Afghanistan, Uzbekistan and Turkmenistan have expressed an interest in becoming connected to BTK, which is the shortest route linking the landlocked region with Europe. Kazakhstan, for example, appears eager to join the route to its strategic Khorgos Gateway on the border with China. The initiators of the project forecast the development of a new railway junction between Central Asia and Europe, after Kazakhstan’s Aktau port and Turkmenistan’s Turkmenbashi are connected to the BTK route. The region’s connection with Europe through the Caspian Sea would indeed provide a shorter route for transportation of local goods. Besides stimulating local manufacturing operations, the BTK route will also provide the countries it passes through with additional new sources of revenue, such as transit fees.

IMPLICATIONS: The Central Asian region, confined by its geography, seeks economic diversification through promoting various ambitious projects such as the China-led One Belt One Road (OBOR) initiative. In general, the regional states see the BTK route as a logical continuation of the multi-billion dollar OBOR project, which intends to link the region with Europe.

The BTK rail line physically connects the central portions of Eurasia, the singular landmass stretching from China’s east coast to Europe’s west coast, containing 70 percent of the world’s population, 75 percent of its energy resources, and 70 percent of its GDP. The overland journey between China and Europe via the BTK rail line will take around 15 days, which is more than twice as fast as sea transport at less than half the price of air travel. Trains can depart from a variety of cities in China, cross into Kazakhstan at the Khorgos Gateway, be easily transported by ferry across the Caspian Sea to the New Port of Baku, and then be loaded directly onto the BTK and head on to Europe — and vice versa in the opposite direction.

In this context, analysts in Kazakhstan have raised the possibility of reviving the Trans-Caspian Transportation Corridor. However, this project requires significant increases in trade turnover and Chinese exports to European markets. These options were discussed during recent the EXPO-2017 held in Astana. On November 5, 2017, the first train cargo carrying 600 tons of wheat from Kazakhstan arrived in the Turkish port of Mersin via the BTK route. The train completed the 1258-km journey from Kars to Mersin in about 30 hours. The first successful transit of goods was received with optimism in Kazakhstan regarding the future benefits of the BTK railway. According to Beybit Isayev, Kazakhstan’s ambassador to Azerbaijan, the BTK railway project is in Kazakhstan’s perspective the most valuable part of the transportation corridors from China through the Central Asian region and the Caspian basin, opening new prospects for delivering Kazakh goods to European markets.

Uzbekistan is eager to join the BTK route for the same reasons. The first high-level consultations regarding Uzbekistan’s participation in the BTK project were held in Tashkent on October 17, 2016, during a meeting between Azerbaijan’s Foreign Minister Elmar Mammadyarov and his Uzbek counterpart Abdulaziz Kamilov. On March 18 this year, a trilateral meeting of Azerbaijan’s, Georgia’s, and Uzbekistan’s railway departments was organized in Tashkent. Uzbekistan is known for its multi-sphere export, including coal and cotton, which has attracted foreign investments and gradually improved the production level. Increased trade turnover through this railway will increase Uzbekistan’s GDP, enabling the country to facilitate and diversify its export of cotton and other agricultural products to the world markets.

The South Korean Black and Caspian Sea Export Company has expressed a willingness to invest in transit projects that pass through Uzbekistan and Kazakhstan. The company intends to export Polypropylene and Polyethylene from these countries. The BTK railway is seemingly the most relevant option for the company to deliver goods to Europe via Turkey. According to the company’s director Lee Dong, the Georgia-based Caucasus-Trans Express Company will be its logistical partner.

Turkmenistan also eyes the possibility of connecting to the BTK railway project, as indicated during President Gurbanguly Berdimuhammedov’s recent visit to Baku. Possessing substantial natural resources deposits, including enormous hydrocarbon reserves, Turkmenistan also seeks alternative routes to Europe. In Baku, Berdimuhammedov emphasized the importance of improving transport connections between the South Caucasus and Central Asia, which would ease mutual trade operations of all these countries. In this regard, the BTK railway may serve as a suitable platform, which will provide access for Turkmen goods to European markets.

Unlike Kazakhstan, Uzbekistan’s and Turkmenistan’s participation in the BTK project nevertheless remains problematic due to limitations in existing infrastructure. Their participation in the BTK project depends on the successful launch of the Navoi – Turkmenbashi railway route, which will connect to the BTK railway, as well as Baku’s Alat International Seaport, and further increase the effectiveness of rail links between Azerbaijan and Central Asia. It remains a precondition for the westward export of Uzbek, Turkmen and Afghan goods via the BTK railway. Early talks regarding the Navoi – Turkmenbashi transport corridor were held in Ashgabat in 2012, when Uzbekistan’s former President Islam Karimov visited Turkmenistan.

CONCLUSIONS: The Baku-Tbilisi-Kars railway project is set to reinvigorate regional economic growth, and to serve as a suitable gateway to Europe for the landlocked Central Asian countries. Hence, beyond its economic value, the BTK will improve connectivity across Eurasia. With its geographic location, Central Asia has the potential to become the core of all main transport projects that pass through this region. Undoubtedly, the Central Asian countries’ participation in the BTK railway project will be beneficial not only for regional but also for European actors.

AUTHOR’S BIO:  Fuad Shahbazov is an Expert-Advisor of the Foreign Policy Analysis Department of the Centre for Strategic Studies under the President of Republic of Azerbaijan.