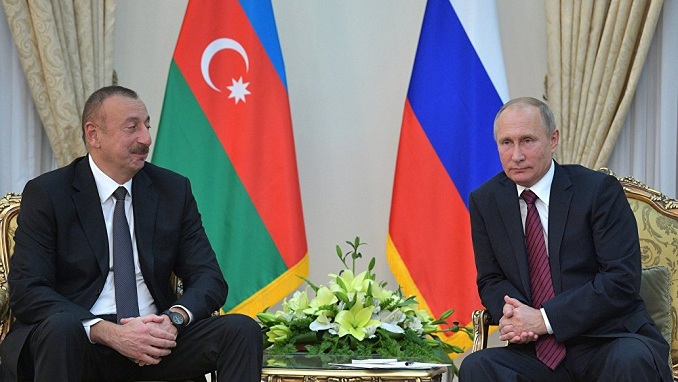 BACKGROUND: Russia’s various political and military initiatives have constituted important tools for regaining influence across Eurasia. However, the Russian-led regional groupings, including the CSTO, are inconvenient alliances. The CSTO unites a number of former Soviet republics including Armenia, Kazakhstan, Tajikistan, Kyrgyzstan, and Belarus (and previously Azerbaijan and Uzbekistan) under the umbrella of defense cooperation against internal and external threats such as international terrorism, drug trafficking and organized crime. Whereas Russia has sought to exert leverage in the former Soviet republics via the CSTO, the organization has not become a powerful tool in this respect. In order to boost the CSTO’s role, Moscow seeks additional members including Azerbaijan, with its economic potential and rich hydrocarbon resources.

Huseynli’s surprising statement came in the aftermath of the most recent Caspian summit held in Kazakhstan. Some observers claim that Russia offered Azerbaijan to pursue CSTO membership during the summit. The invitation was allegedly a consequence of the policies of Armenia’s new post-revolutionary government. Moscow is seemingly dissatisfied with Armenia’s so-called “u-turn” in domestic policy and its purges among the pro-Russian elite. Despite intensive negotiations and meetings between Armenian Prime Minister Nikol Pashinyan and Russian President Vladimir Putin, bilateral relations have become increasingly strained after the revolution. For Armenia, the main purpose of the country’s CSTO membership is to provide a shield against a possible attack from Azerbaijan’s Armed Forces.

Moreover, the purges and arrests among Armenia’s military elite, including the CSTO Secretary-General Yuriy Khachaturov, have put Armenia’s status as an ally of Russia into question. Yet, Tigran Balayan of Armenia’s MFA claimed that the arrest of the CSTO chief “is purely an internal process … Armenia is loyal to its responsibilities to increase the power of the CSTO.”

IMPLICATIONS: Russia has long sought to involve Azerbaijan in the CSTO and the Eurasian Economic Union (EEU), as the country would make a significant contribution to the military and economic potential of these organizations. Azerbaijan’s membership would place almost 70 percent of the South Caucasus region within the domain of the CSTO. By joining Azerbaijan to the CSTO, the organization would have common border with Iran that would further increase Russia’s room for maneuver.

Azerbaijan would indeed gain some benefits from membership in the CSTO, which would pave the way for the acquisition of weapons system from Russia and Belarus at a considerable discount or even at internal prices. The possibility of easy acquisition of Russian weaponry and discounts on armaments is a driving motive for Armenia to remain in the CSTO. Moreover, Azerbaijan’s possible membership would bring it closer to Russia, and particularly ease cooperation in the Caspian Sea following the recent signing of the convention on the Sea’s legal status. All these factors make CSTO membership an appealing prospect for Baku.

Although Azerbaijan is not a CSTO member, it enjoys strategic partnerships with both Kazakhstan and Belarus, unlike Armenia. In addition, Yerevan has become frustrated in recent years as other CSTO members have sold weapons to its arch-rival. Most recently, Azerbaijan’s President Ilham Aliyev signed a new US$ 5 billion military agreement with Russia.

The dramatic events in Nagorno-Karabakh in August 2014 further highlighted these contradictions, as did the confrontation in April 2016 when the CSTO itself and its members Kazakhstan and Belarus barely reacted to the ongoing tensions. No official statement from the CSTO members came in response, as the conflict in Nagorno-Karabakh falls outside the CSTO’s purview – the CSTO can protect only the internationally recognized borders of a member country.

Yet Azerbaijan’s membership in the CSTO would undermine its relations with the West and endanger multi-billion dollar investments in energy and pipeline projects. For more than two decades, Baku has enjoyed a solid and balanced relationship with Iran and Russia on one hand, and the West on the other. Simultaneously, Russia already openly describes Azerbaijan as a strategic partner, while MP Huseynli underlined that “Azerbaijan is a reliable partner of Russia in the South Caucasus region.” According to some Azerbaijani officials, Pashinyan’s government is plotting against Russian interests in the South Caucasus by pursuing a pseudo pro-Western policy and thus avoiding the Nagorno-Karabakh conflict resolution process.

Given Azerbaijan’s pursuit of a neutral and balanced foreign policy, the country is unlikely to seek membership in the CSTO. As long as the Nagorno-Karabakh conflict remains unresolved, Azerbaijan stands to gain more from diversifying its military partnerships with other international actors, in particular with NATO. Accordingly, in 2017, Baku and NATO approved an updated Individual Partnership Action Plan aiming to upgrade the capability of the armed forces until 2019. Recently, Azerbaijan’s Armed Forces took part in NATO’s large-scale military drills “Rapid Trident 2018,” which started in Ukraine on September 2.

Huseynli’s statement was seemingly intended to test and evaluate the reactions from Moscow and the West. Unlike Russia, Armenia issued an official reaction: according to MFA spokesperson Anna Naghdalyan, Armenia will use its veto in case Azerbaijan applies for membership in either the CSTO or EEU.

Armenia’s position in this regard should no come as a surprise, given that the CSTO, in Armenia’s perspective, primarily serves as protection in case of a new armed conflict with Azerbaijan. Moreover, Azerbaijan’s close strategic partnerships with Belarus and Kazakhstan would increase the country’s influence in the CSTO.

CONCLUSIONS: The current discussion on CSTO membership in Azerbaijani media should not be taken to imply that Baku is seriously pondering this option. However, the country will likely continue to float this prospect in the near future in order to check the pulse of the Russian authorities. Russia does not enjoy sufficient leverage in Azerbaijan to coerce the country into joining the CSTO. More likely, the motive behind having an Azerbaijani MP from the ruling party endorse CSTO membership was to issue a warning to Armenia, and probably to the West in the light of growing anti-Azerbaijan rhetoric. Yet since CSTO membership would seriously delimit Azerbaijan’s ability to maneuver in the international arena, Baku is highly unlikely to take concrete steps in this direction. Another Azerbaijani MP, Rasim Musabekov, recently described the discussions about Azerbaijan’s CSTO membership as dangerous and nonsense. According to him, Azerbaijan needs more intensive cooperation with Russia, but this does not necessarily require the country to pursue CSTO membership.

Thus, Azerbaijan remains unlikely to become a CSTO member in the next several years, especially in light of the upcoming Azerbaijan – EU cooperation agreement. Some claim that membership in the CSTO would solve the Karabakh problem in Azerbaijan’s favor, however, this argument is based on a gross oversimplification of the conflict resolution process.

Fuad Shahbazov (@fuadshahbazov) is a Senior Analyst at a Baku-based consulting organization. He is currently a Visiting Researcher at the Washington D.C based Center for National Security and Intelligence Studies. He covers regional security, military, and defense industry issues.