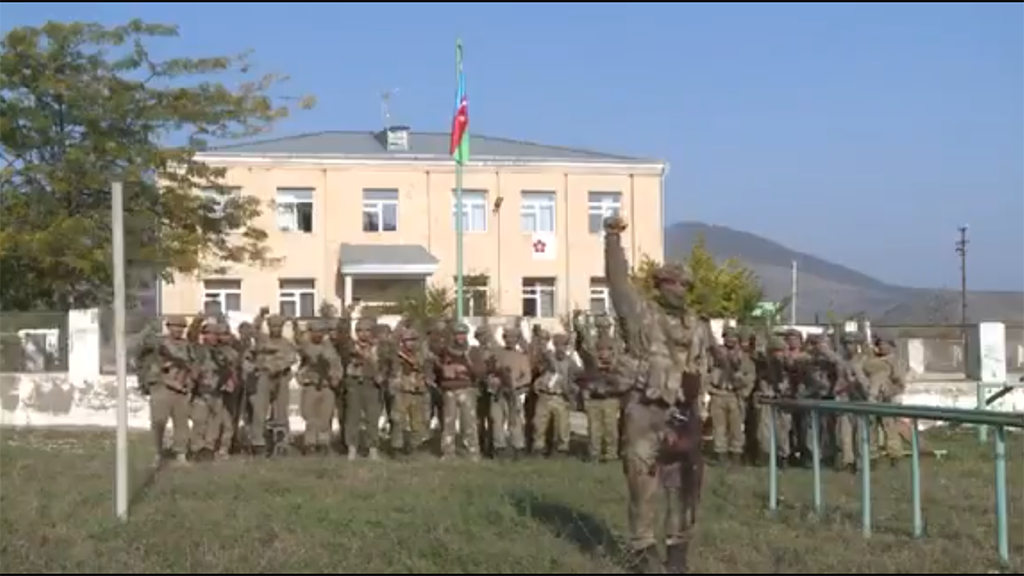 Screenshot of an official Azerbaijani video showing the capture of Zengilan.

Azerbaijan’s armed forces are continuing to advance deeper into previously Armenian-held territory, raising the prospects of an offensive into the heavily populated core of Nagorno-Karabakh itself.

Azerbaijan has recently pushed into several additional regions to the south of Nagorno-Karabakh, an area wedged between Armenia and Iran. On October 20, authorities announced that they had captured Zengilan, the former capital of the district of the same name, far in the southwest of the Armenian-occupied territories. They also claimed to have captured additional settlements in the provinces of Fuzuli, Jabrayil, Khojavand, and Zengilan.

While official claims in the war have to be received with great skepticism, independent military analysts using open-source imagery have determined that Azerbaijan has in fact advanced deep along with a tongue of land bordering Iran and approaching the international border of Armenia. The situation on the ground remains dynamic, however, and control of particular territories can pass back and forth. Armenians have accused Azerbaijan of exaggerating their military advances for PR purposes.

“Azerbaijan’s military operations have a clear tactic, which our command is closely monitoring,” Armenian Defense Ministry spokesperson Artsrun Hovhannisyan told reporters on October 20. “What I mean is that small Azerbaijani subversive groups penetrate into villages and towns, film themselves there, spread those images, which is intended to feed their society. But, unfortunately, this also affects us.”

Azerbaijanis have been buoyed by the successive reports of new victories; cheering broke out in Baku after the government released a video of Azerbaijani soldiers raising their flag in Zengilan.

All of this has taken place during a nominal ceasefire; following a barely effective agreement signed under Russian mediation on October 10, the two sides signed another one a week later and it, too, fell apart quickly.

Diplomacy is nevertheless continuing: the foreign ministers of both countries are scheduled to go to Washington on October 23 and meet separately with United States Secretary of State Mike Pompeo. The leaders of both countries recently said that they would, in theory, be open to meeting the other.

But it is clear that developments on the battlefield are driving events far more strongly than anything agreed over the negotiation table. Azerbaijan President Ilham Aliyev, in an October 20 address to the nation, gave a strong impression that the offensive would continue as long as it could.

“Our superiority on the battlefield is no longer a secret,” he said. “We are fighting on our own land, giving martyrs and restoring our territorial integrity. These steps will continue to be taken. Armenia must declare before it is too late that it is withdrawing from the occupied territories. After that, the fighting may stop.”

Aliyev sought to emphasize, though, that future advances would not come quickly. “Not only the fortifications built there but also the military terrain in the liberated lands are more favorable for the Armenians,” he said. “We are fighting against their fortifications, their cannons, and missiles, as well as the natural terrain. We are liberating our lands inch by inch from the occupiers. It is very difficult.” Initially, it appeared that Azerbaijan’s goals for this offensive may be the capture of one or two of the Armenian-occupied districts around Nagorno-Karabakh, Fuzuli, and/or Jabrayil. But its successes on the battlefield appear to have expanded its ambitions.

In an October 16 interview with Turkish television, Aliyev said that “without Shusha our cause will be unfinished.” Shusha is the city that Azerbaijanis consider the Azerbaijani cultural heart of Karabakh, and it is less than 10 miles from the de facto capital, Stepanakert. (Armenians spell the name of the city Shushi.)

The likely next immediate target appears to be the district of Gubadli, said Fuad Shahbaz, an Azerbaijani analyst. “As of today, the southern front of [the Armenian forces] is nearly collapsed, as my sources in the front say that they face nearly zero resistance in that direction, which makes me think that Gubadli district will also fall under Azerbaijani control in a few days,” Shahbaz said in an email interview with Eurasianet. By contrast, the Armenian forces appear to be concentrated in the northern front, where the Armenians appear to be placing “special importance,” meaning that “situation is more complicated” there for the Azerbaijanis, he said.

Next in line would be Lachin, the crucial strategic corridor connecting Armenia with Nagorno-Karabakh. “It is difficult to convey the severity of the situation on the ground,” Richard Giragosian, the head of the Yerevan think tank Regional Studies Center, told Eurasianet. “As their advance approaches Lachin and threatens to move against Shushi, Aliyev gives an official speech that not only fails to even mention diplomacy but vows to push ahead with the combined Azerbaijani-Turkish attempt to ‘resolve’ the Karabakh conflict by force.”

The role of Russia will be critical in this period, Shahbaz said. Moscow has been conspicuously passive, but both sides are waiting for it to make a more decisive intervention.

“Azerbaijan wants clear Russian pressure on Armenia and a concrete schedule of withdrawal,” Shahbaz said, adding that Moscow could also lean on Baku to halt its offensive.

“All eyes are on Moscow, as the crucial tipping point may come if the Azerbaijani leader agrees to meet the Armenian prime minister for a Moscow summit,” Giragosian said. “But just as the absence of deterrence has driven Azerbaijani and Turkish defiance of two previous attempts by Moscow to broker even a brief agreement on a cessation of hostilities, it remains unclear if Baku and Ankara will return to diplomacy.” Tens of thousands of Armenians have fled Karabakh into Armenia since the start of the fighting, and an advance into the more populated areas like Stepanakert and Shushi would certainly result in a mass exodus.